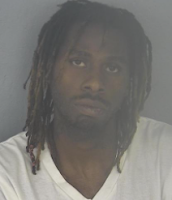 (From the Springfield Police Department)On Oct. 7, 2021, at 4:41 p.m., the Springfield Police Department was dispatched to 422 E. Norton Rd. for a person sustaining a gunshot wound. When officers arrived, they found two males on scene who were suffering from apparent gunshot wounds. One male was transported to a local hospital for treatment for injuries that were not considered life threatening. The other male was provided medical treatment on scene, but he succumbed to his injuries and was pronounced deceased.

The deceased person was identified as I’Shon Dunham, a 17-year-old male from Springfield, Missouri. Next of kin notifications have been made.

The preliminary investigation by Springfield Police Detectives has resulted in two arrests. One of the suspects has been identified as Antonio J. Meanus, a 30-year-old male from Springfield, Missouri. The other suspect was identified as a 16-year-old juvenile male from Kansas City, Missouri. They were both interviewed by detectives, and Antonio Meanus was booked into the Greene County Jail for 2nd Degree Murder. The juvenile suspect was also arrested for 2nd Degree Murder and booked into the Greene County Juvenile Detention Center.

This case was presented to the Greene County Prosecutor’s Office for review. On Oct. 8, 2021, Antonio Meanus was charged with 2nd Degree Murder and Unlawful Possession of a Firearm. The Greene County Prosecutor’s Office cautions that the charges contained in the felony complaint are merely allegations and that the defendant is presumed innocent until and unless proven guilty in court. This case was also submitted to the Greene County Juvenile Office for review and filing of possible charges.

Detectives continue to investigate and are asking anyone who has information about this incident to contact the Springfield Police Department at 417-864-1810 or make an anonymous call to Crime Stoppers at 417-869-TIPS (8477).

This incident marks the eighteenth homicide for 2021.
Posted by Randy at 7:18 PM