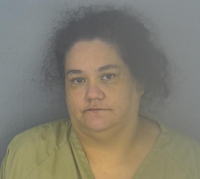 (From the U. S. Attorney for the Western District of Missouri)A Nixa, Missouri, woman who led law enforcement officers on a high-speed chase at night with no headlights pleaded guilty in federal court today to trafficking methamphetamine.

Gina N. Nunez, 43, pleaded guilty before U.S. District Judge M. Douglas Harpool to one count of possessing methamphetamine with the intent to distribute.

By pleading guilty today, Nunez admitted that she was in possession of methamphetamine found in her vehicle after she led officers on a high-speed chase over two stop strips before crashing her vehicle and being arrested.

A sergeant with the Christian County, Mo., Sheriff’s Department attempted to stop Nunez, who was driving a gray Honda on U.S. Highway 65, a few minutes before midnight on June 27, 2021. She was driving approximately 17 to 32 miles per hour on the highway and crossing over the center line. Nunez waved at the officer as he followed her with his emergency lights and siren on for approximately three minutes. Nunez then accelerated to speeds in excess of 100 miles per hour northbound on U.S. Highway 65 to the Finley River bridge, where Ozark, Mo., police officers had positioned spike strips. Nunez continued travelling at speeds in excess of 100 miles per hour, without headlights, into Greene County.

The Greene County, Mo., Sheriff’s Department deployed a spike strip near U.S. Highway 65 and Chestnut Expressway. Nunez continued northbound on U.S. Highway 65 at speeds in excess of 100 miles per hour. At approximately 12:16 a.m., Nunez exited the highway onto Interstate 44 and crashed into the guardrail. Her vehicle was disabled, and she was arrested.

Under federal statutes, Nunez is subject to a mandatory minimum sentence of five years in federal prison without parole, up to a sentence of 40 years in federal prison without parole. The maximum statutory sentence is prescribed by Congress and is provided here for informational purposes, as the sentencing of the defendant will be determined by the court based on the advisory sentencing guidelines and other statutory factors. A sentencing hearing will be scheduled after the completion of a presentence investigation by the United States Probation Office.